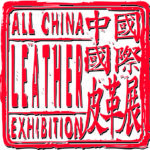 A Challenging time for China’s Leather and Footwear Sectors This 22nd edition of the All China Leather Exhibition (ACLE) will take place at the New International Expo Centre in Pudong, Shanghai from 3 – 5 September 2019. The event covers a total exhibition area of 92,000 square metres and 8 halls of international and domestic tanneries, machinery and chemical suppliers.

The whole supply chain for the leather and footwear manufacturing industries is represented with a wide array of leathers, components, chemicals and machinery on display. Many of the world’s leading chemical suppliers are present at ACLE and use it as a platform to launch new products and technological developments direct to their target market in China.

The global leather industry has faced a challenging time since last year’s APLF Leather ended in March one year ago. Raw materials prices continued declining due to high slaughter to satisfy growing red meat demand from consumers in developing countries especially China. This led to more raw material being available and weighing on the market. For example, once year ago benchmark Heavy Texas Steers were trading at US$55 and at the time of writing were at US$33 – US$34 a fall of 40% in value in just twelve months.

Paradoxically, lower prices have not encouraged increased demand for leather by manufacturers especially in the footwear sector and tanneries have complained about lower volumes and lower prices. The China leather sector has not been immune for these adverse market conditions as imports of raw hides, crust, semi-finished and finished leather all fell in 2018 by an average of about 9.9% according to CLIA figures.

The continuing boom in sneaker and casual footwear driven by the athleisure fashion and lifestyle shift is still turning the attention of designers and stylists towards synthetics for both garments and footwear.

ACLE is the ideal business platform where to make contact and negotiate with the decision makers from China’s leading tanneries and the footwear factories that still manufactured 3.63 billion pairs of leather shoes in 2018.

What has tended to put a brake on consumer spending in China has been the ongoing trade war with the US. Retaliatory tariffs have been imposed by both countries during 2018 and, at the time of writing, there are still negotiations taking place to defuse the tension and come to an agreement so that trade can continue unhindered. The threat of 25% tariffs being imposed by the US on 1 March receded while talks were underway as President Trump showed flexibility as talks appeared to be progressing.

Even the IMF lowered its global GDP growth forecast from 3.9% to 3.7% due to the trade war between the US and China as uncertainty was generated in the global economy.

On the other hand, positive international trade news included the North American Free Trade Agreement between the US, Canada and Mexico being successfully re-negotiated and is now called the United States–Mexico–Canada Agreement (USMCA). The defunct TPP after the withdrawal of the US was also concluded and is now known as the Comprehensive and Progressive Agreement for Trans-Pacific Partnership (CPTPP) with its members Australia, Brunei, Canada, Chile, Japan, Malaysia, Mexico, New Zealand, Peru, Singapore, and Vietnam.

From the point of view of China, the Belt & Road project to boost international trade with Europe via Eurasia continues apace. As shoe production has continued to move to low labour cost countries such as Vietnam, Cambodia, Myanmar and Indonesia in the last couple of years, China’s trade with the ASEAN nations could become even more important for its leather and footwear industries.

For the leather sector to recover a move away from synthetics for footwear manufacturing is needed. One reason that could lead to such a move is the so-called “war on plastic” that is posing a danger to the environment and marine life in the oceans. With consumers becoming more environmentally aware and demanding sustainable materials and production in the products they buy, awareness of the dangers posed by petroleum-based materials and fibres could seep into their consciousness and by extension influence their purchasing decisions. Even vegan fashion cannot justify polluting the environment with petroleum-based materials that are essentially non-biodegradable.

It is for this reason that educational programmes on the qualities of leather are vital so that consumers become aware of the beauty, versatility and biodegradability of leather. This task will become much easier when cruel animal welfare practices are combated so that animals are treated humanely and ethically. This is where Leather Naturally could have a significant role to play on educating consumers about how leather is actually made and where it comes from.

Aa a business platform and meeting place where opinions can be exchanged and information gathered, ACLE is the venue par excellence as the European leather sector gets back into gear after the traditional August vacation break.

In this context APLF’s partner in organising ACLE, the CLIA, is marshalling a buyer recruitment campaign not only in China but also in the ASEAN countries that will also need to import manufacturing supplies. At the 2018 fair there was a major delegation from Vietnam that came to Shanghai to source materials for its footwear and fashion accessories sectors.

Each year more than 23,000 buyers come to Shanghai from the major manufacturing provinces of China seeking products from the whole supply chain of the leather sector.These can be viewed at ACLE in its eight domestic and international exhibition halls, and as such remains as the leading event in the industry’s trade fair calendar.